Christmas comes upon us, and as is traditional in England, snow and cold weather is found in no abundance, so there might be a few individuals who you might want to blame for the bad weather. These are the men and women who choose to use ice themed gadgets or have ice themed powers, to embrace evil and give good the cold shoulder (ha ha). In order, my top 4 ice-themed villains of DC comics (1 being the least favourite, 4 being the most) 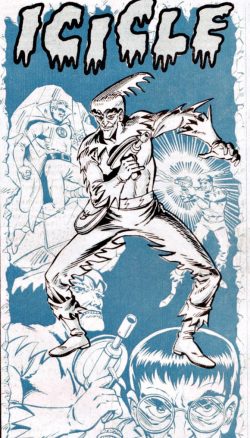 By far the oldest villain in my list, the Icicle first made his debut in 1947, All American Comic, issue 90. Making his first appearance in the Caped Crusader’s Gotham City, Joar Mahkent made a quick start of his career by freezing a luxury liner solid. Freezing a boat completely solid is bound to attract attention, and Icicle found his first foe in the form of DCs first Green Lanteen, Alan Scott (not to be confused with Hal Jordan). Indeed, if you read Batman’s Hush, a flashback shows a young Bruce Wayne and his friend, Thomas Elliot, watching a fight between Icicle and Green Lantern. 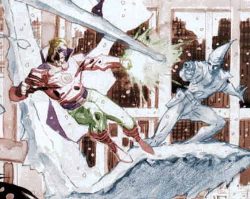 After being kicked around the place for a while, Icicle joined what is probably comic’s first supervillain team-up, the Injustice Society of the World, along with undead Solomon Grundy, the immortal Vandal Savage the ridiculous Fiddler (don’t ask) and a few forgotten villains. However, looking like one of Santa’s Elves that has spent too long in the freezer didn’t really up the character’s cool factor. After his death, his body was kept in the JLA’s Hall of Justice (the sickos). Fortunately for some, unfortunately for others, the apple doesn’t fall far from the tree and Joar’s son Cameron took up the mantles as Icicle Mk2. However, whetheras Joar was a genius with a gun that lowered temperatures, exposure to cryogenic chemicals and substances led to Joar’s son, Cameron having cryokinetic powers, leaving him much cooler than his dad. 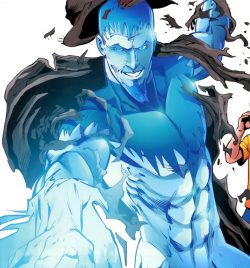 Much more ruthless than his predecessor, this Icicle killed, robbed and pillaged, basing his ideals more on creating havock rather than leaving a legacy. Cameron has fought several of DC’s top profile heroes, including Batman and Superman, which earns him a title on this list. 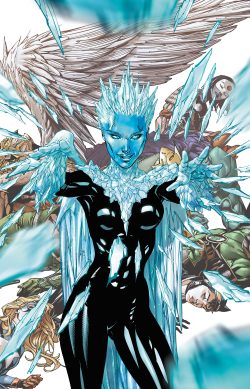 Though the only female on this list, don’t be so quick to judge. There’s a reason the name is Killer Frost. The first incarnation of Killer Frost, started off as Crystal Frost, a student at the Hudson University. Unfortunately she fell in love with her Profesor, Martin Stein, one half of superhero Firestorm, sharing the identity with university student Ronnie Raymond. Unbeknown to most, Universities can be pretty dangerous, and poor Crystal Frost was locked in a thermo frost chamber, turning her into Killer Frost, a woman with cryokinetic powers. As most angry depressed teenage girls with extraordinary powers tend to do, she turned her wrath on Martin Stein, so Firestorm. Frost was found to be a team player, joining supervillain groups such as the Ice Pack and the Secret Society of Supervillains (say that 10 times without getting it wrong and ill give you a euro) . 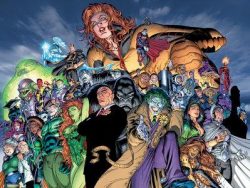 Unfortunately life is tough, and after Crystal’s friend Louise Lincoln ran a few tests, it was revealed that Killer Frost’s powers were (ironically) killing her. As Killer Frost could absorb thermal energy to thrive, Firestorm allowed her to absorb some of his energy. Unfortunately she took too much and died. The mantle was passed on to Louise, who blamed poor old Firestrom for killing Crystal (men, we don’t know what we did). Most recently, Caitlin Snow (as seen on CWs the Flash) would become Frost. Again. Killer Frost’s cryokinetic abilities, cold attitude, team affiliatons and the fact that she can absorb heat and not be affected by it, makes her number 3 on this list. 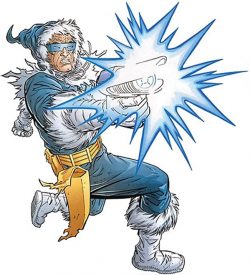 The second entry on this list is what is undoubtedly the most iconic of all of the scarlet speedsters villains, Leonard Snart aka Captain Cold, leader of the Rogues. Raised along with his sister, Lisa who later became the Golden Glider. 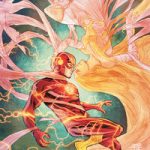 Leonard’s father was a drunk who would frequently dish out his rage on Leonard and his sister, as well as their mother. Leonard and Lisa’s only refuge was their kind hearted grandfather who worked in an ice truck, and would give Leonard and Lisa ice cream and other treats. Though cold, Leonard began to associate the ice with a non hostile environment. Unfortunately all good things come to an end, and when Cold’s Grandfather died, Leonard and Lisa’s life became a living hell. Tired of his father’s abuse, Len left his father’s household with his sister, and turned to a life of crime. Joining a petty street gang the members wore visors to protect their eyes from the flashes of gunfire. However the Flash put a stop to the robbery and Cold became obsessed with finding a way to defeat the Flash. After reading an article in the newspaper that theorised that energy emissions from a cyclotron could slow the Flash down, Cold broke into a cyclotron lab, and built a gun that would freeze the molecules around it, a freeze ray of sorts. 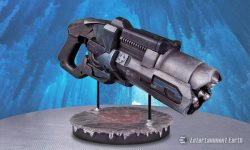 Cold  is an expert with this weapon, which he can use to do all manner of tasks. Mr Freeze (see below) has admitted that Cold is the only person to have mastered the sub zero effects of the cold gun. Cold has tangled with the Flash numerous times, even killing Bart Allen, the fourth incarnation of the character. He is the leader of the Rogues, a group of supervillains (Heatwave, Trickster, Mirror Master, Cpt Boomerang and Weather Wizard) and has a strict moral code. 1) the Rogues don’t kill. 2) No drugs. 3) The Rogues cannot inherit a supervillain’s name unless hes dead. An able and cunning leader, Cold recently gained cryokinetic abilities in the New 52 thanks to a genome recorder which re-wrote his DNA , but the process tore the Rogues apart as a team, as each member gained metahuman abilities but at a terrible cost. 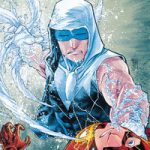 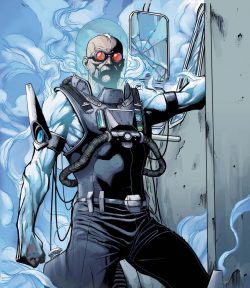 Topping our list is this tragic villain. Mr Freeze originally started as a gimmicky, ridiculous villain named Mr Zero, who would use a freeze ray. The character was generally one of the Caped Crusaders less well known villains, and after a while he was carelessly killed off, dying at the hands of the Joker. The villain made a few appearances on Adam West’s, 1966 Batman television show, but this did not do much to up the characters cool factor. Or popularity. However, when hit animated series Batman TAS was in full swing, writer Paul Dini changed the character forever in the Emmy award nominated episode Heart of Ice. 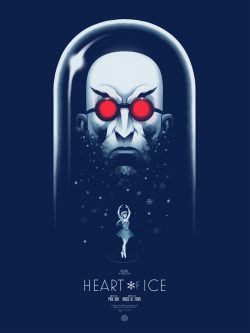 The episode introduced us to Victor Fries, a scientist who worked in cryogenics. A loving husband to Nora Fries, Victor was devastated when his wife contracted an incurable disease, and froze her in a cryogenic tube to keep her alive until a cure was found. However Fries´s boss, Ferris Boyle found out, and ordered Nora to be removed from the tube, dooming her. An enraged Fries tried to attack Boyle, but a stray shot fired from one of Boyles security guards hit the cryogenic tube, spraying Victor with chamicals. Fries surived, but could only live in sub zero temperatures. Building a suit that could sustain said temperatures, Fries built a freeze ray from the components in his lab, using experimental cryogenic medicine, and set out for revenge. Fries has gone on to become one of DCs most popular villains, due to his tragic story, and has featured in groups such as the Ice Pack and the Secret Society of Supervillains. A tragic, cold hearted man utterly devoted to saving his wife, he should never be associated to Arnold Schwarzennegers ghastly portrayal, one of DCs most noble villains.

The Blue Snowman, is quite frankly a bit pathetic. A woman that runs around in a blue male snowman costume, whose secret weapon is blue snow that freezes people. Increadibly this villainess actually made it into a team, along the sides of Icicle, Captain Cold, Freeze and Killer Frost. Weird. 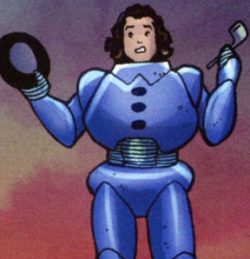