King Kong, since the great apes arrival onto the silver screen in 1933 the monster rapidly became one of the most popular characters in fiction and an instant hit. Audiences around the world were dumbfounded as Kong battled planes on top the Empire State, and fought dinosaurs on his island home (though nowadays the special effects are laughable in their age). A classic of cinema and the birth of a legend. 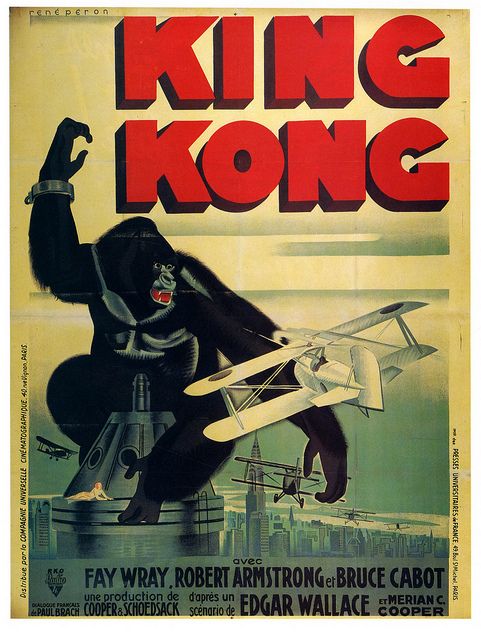 From then on, movies and directors milked Kong like a prize cow. A sequel to King Kong titled Son of Kong was released in the same year, and soon after King Kong Vs Godzilla was produced by Japanese studio Toho in 1962 and King Kong Escapes found its way into cinemas in 1967. A remake was filmed in 1976 and King Kong was reinvented with modern effects by Peter Jackson in 2005.  Not counting innumerable appearances in TV, comic books, novels and other forms of media Kong had become a massive staple of pop culture. Then in 2014 Legendary studios made Godzilla, a remake of the world-famous Japanese monster. Though not receiving critical acclaim it made a robust and very sizeable amount at the box office and was succesful amongst fans. Legendary Studios had succesfully began the Monsterverse, a series of films yet to come featuring Japans most famous Kaiju (monsters) battling it out. And who best to continue the monsterverse than Kong? 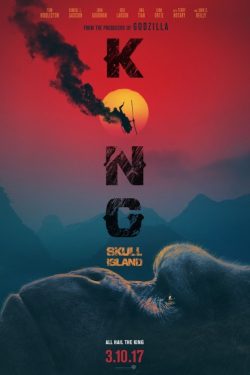 Set in the aftermath of the Vietnam War, Kong: Skull Island sees the MONARCH corporation (seen in Godzilla) seek out an expedition to a uncharted and undiscovered island only recently picked up by satellite imagery. Under the pretext of a geological mission, MONARCH hires a team of professional pilots (led by Samuel L Jackson’s Preston Packard) an ex-SAS tracker (Tom Hiddleston) and a photographer (Brie Larson) as an unsuspecting group with the purpose of charting the territory. However, things soon go awry as MONARCH drops bombs on the Island to chart the land with seismic waves, much to the chargrin of a certain King…

Kong Lives! And in spectacular fashion. Standing at 140 metres high and magnificently rendered in CGI, the great ape wreaks havoc on the big screen like nothing you have seen before. Providing by far the most entertaining battles and action scenes in the movie as he tears army helicopters into ribbons, fights predators and goes toe-to toe with the horrific Skullcrawlers, reptilian beings that serve as the films primary antagonist. And Skull Island shines. Filmed beautifully in real life (monsters were digitally added), Skull Island is both a tropical haven, a rich landscape of jungles and plains and a hellhole for the human visitors. With the army trekking through a deadly jungle the film has a fantastic feel to it, reminiscent of classics like Apocalypse Now in its lighting, dialogue and amazing soundtrack. 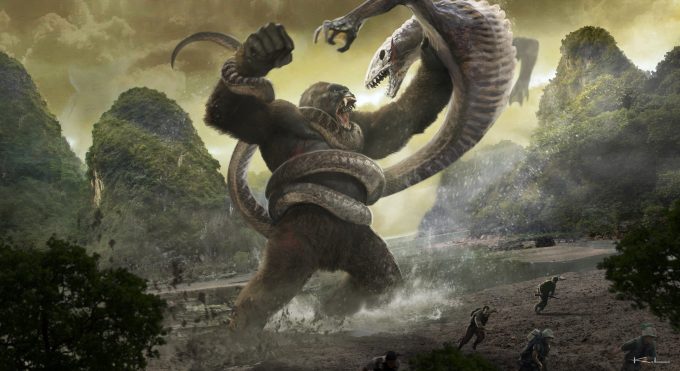 More exciting is the inclusion of the other animals that share Kong´s ecosystem, a giant squid, repulsive spiders taller than a building, pterodactyls like birds with a hunger for flesh and, of course, the humans themselves in the form of the Iwi tribe. However, one of the main problems with Skull Island is the human aspect. There are some great performances, especially Samuel L Jackson as the raving Packard, Hiddleston as tracker James Conrad and John C Reilly as a WW2 pilot stranded on Skull Island, who not only introduces the setting well, but provides humour and the more heartfelt aspects of the film. The rest, however, is somewhat uninteresting. Brie Larson is a great actress handed a bland character, whilst the group of soldiers featured in the film are essentially the Marines from Aliens, (though two soldiers, Cole and Mills are very entertaining to watch). Others like a geologist (Corey Hawkins) and a biologist (Jing Tiang) serve only to blabber on for exposition and further the plot if it ever drags. Yet, despite its faults, Skull Island is ridiculously entertaining, with some of the most phenomenal and outstanding monster-on-monster fights (the main reason to see the film) in American cinema, which are not only creative and exhilarating, but avoid being swamped in a overuse of CGI beasties.

All in all, Kong: Skull Island remains a welcome addition to American monster movies and a fantastic continuation of Legendary Studios’ promising Monsterverse. With the behemoth ape already a success amongst moviegores and rising King of the box office, it’s only a matter of sitting back and trying not to squel in anticipation for when Kong faces off against Godzilla.