Recommended age: as from 13+ 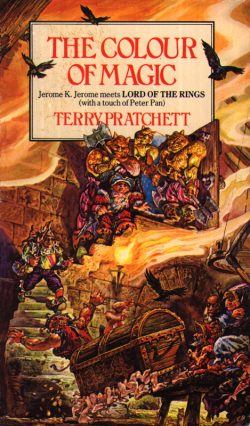 We are excited to introduce you to a world of fantasy that you will not want to leave. You can rest assured that once you start The Power of Magic, you will continue reading all the books in the Discworld series, and you will be very happy to know that there are more than 40 of them! Not enough, you can take our word on this.

Daniel. L.C. (13 years old): “The Discworld books are a series of stories which are intriguing and appealing to a wide crowd, mostly mature young adults and grown ups. This series of stories is set in a flat planet carried on top of four elephants, which are balanced on the back of a massive turtle, which swims around calmly in the vast ocean of space. 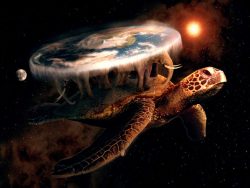 The books are packed with massive amounts of humor, sarcasm, irony and also action; with characters ranging from semi-evil Patricians and cunning assasins to policemen, religious fanatics and even werewolves.

I liked these books because of the fact that Terry Pratchett manages to mix in so much sarcasm and humor into the wide variety of exotic characters whilst still maintaining a suitable level of seriousness and quantities of action and intrigue.

In conclusion, I think that every young adult or adult should read these books unless that specific pearson is sustantiably thick, LOL, or finds it hard to understand Terry Pratchett´s side spliting jokes.”

Pablo L.C. (13 years old): “Introducing the Discworld, the madcap planet created by Sir Terry Pratchett. A world of magic, of adventure, of walking luggages, sorcerers and eight colours of the rainbow (including Octarine, the colour of magic) this world is a fantasy and literary treasure.

Filled with amazing locations such as the twin cities of Ankh-Morpork, the jungles of the Arabia like Klatch, the frozen plains of the Hub and magic filled wastelands, with such a high amount of magical residue that if you go to sleep one day you might wake up to find you’re not the same shape or, on that matter, species.

Miriads of characters populate the Discworld. The cowardly Rincewind, the world’s worst wizard and an incredible racist (he’s run about every race imaginable; from the hundred foot to the cross country) his magical walking luggage, half enchanted wood, half homicidal maniac. A Grim Reaper with an existential crisis, a scythe that can cut through sunlight and a enormous, white horse named Binky (it’s a good name for a horse). An ex-conman whose only qualities are being a swindling, conniving pathological liar with almost no moral company, who fits in perfectly in goverment service, as Head of the Post Office and chief of the Royal Mint, a police force that consists of a troll, a fat senior, a vampire, a human dwarf (through adoption), some more dwarfs, a tough as nails Commander, a werewolf and Nobby Nobs, who has to carry a certificate to prove he is human. 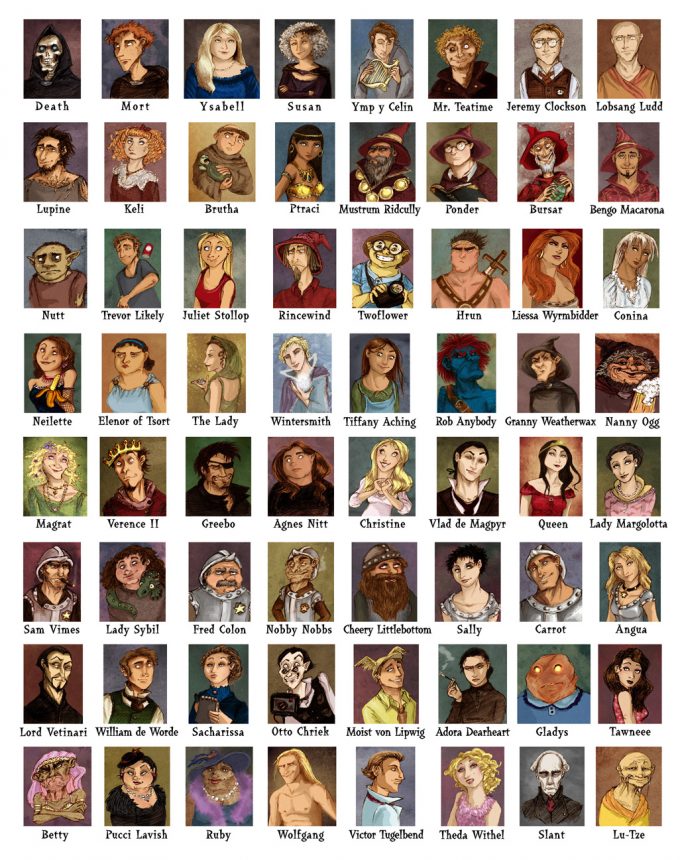 As well as this there are dark gods, sorcerers, religious zealots, creatures from the Dungeon Dimensions, The Four Horsemen, Mrs Cake, conniving Patricians, Gaspode the Wonder Dog, and much much more.

So, pick up the first book, The Colour of Magic and begin your journey into a intelligent, witty, brilliantly written series of books that will change fantasy as you know it.“

Sir Terry Pratchett is Britain’s second most-read author, beaten only by… of course J.K. Rowling. He wrote over 70 books of which more than 40 are part of the Discworld fantasy series. 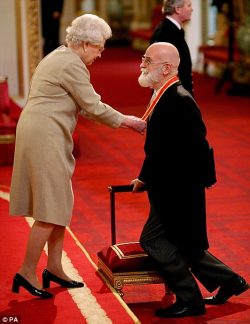 He was knighted by Queen Elisabeth II in 2009, a high recognition to his work that Sir Pratchett very much appreciated, in his own words: “you can’t ask a fantasy writer not to want a knighthood. You know, for two pins I’d get myself a horse and a sword.”

And so he forged himself a sword!! And a very special one indeed, made of iron ore to which he added a few chunks of meteorite — “thunderbolt iron” for their “highly magical” properties.

He died of Alzheimer on 2015 aged 66. Even though he suffered this mental illness he continued to write until the end of his days. We shall always be grateful for the Discworld books that we love, he has given us many hours of great read.