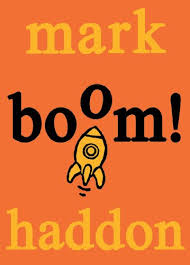 BOOM! or how your life could go from a flying sandwich to a flying saucer! Sounds insane? It is insane!!

This is a unique story, an adventure that will take a very down-to-Earth boy into outer space, no NASA training required! Jimbo and his friend Charlie will test their spying and survival skills and confront an enemy difficult to spot. If they are lucky maybe they can keep their lives and save humanity as a bonus.

Science-fiction doesn’t start to describe the plot of this short and fantastic book that you will read as fast as a rocket.

Jaime L.C. (11 years old): ”This book is very interesting. It is about aliens that come down to Earth and blend in with humans. It is a very good book as you want to keep reading until the last page. It is a science fiction book and I would recommend it to readers that like stories that are out of this world!”

Pablo L.C. (11 years old): “This book is really funny and witty, filled with: giant spiders, glow finger men, floaty balls, aliens and a huge BOOM! Highly recommended for all the family. Guaranteed to make you hurt with laughter. Gridzbi Spudvetch to all you humans! 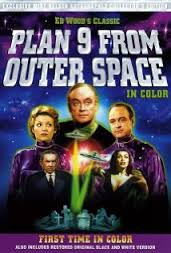 Normally we like to recommend a film based on the book we have selected, or just a good film. But today we are making a naughty exception. This is a film that has achieved, by its own merits, the doubtful honor of being considered the Worst Film Ever made. The temptation to include it was too strong, sorry… So without further ado, let us present you Ed Wood‘s masterpiece: Plan 9 from Outer Space.

Daniel L.C. (11 years old): “This movie is so bad that it is hilarious!!! And they always re-use the scenery (its so fake the floor even shakes!!). The actor of the main zombie died so the new actor had to put an arm across his face so you wouldn’t notice he was another actor!! (the movie is the biggest funny-fail I have ever seen!)”

If you venture to watch the movie be prepared for the flying saucers, literally, strings included, aliens dressed as for a circus act, actors having to impersonate other actors…and such an extravagant scientific explanation to the plot that it will blow your science teacher’s socks off! This is a link to the worse dialogues in the film, click here 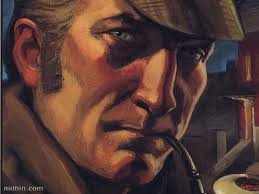 Boom! was originally titled Gridzbi Spudvetch. The plot was full of gaps, very few people bought the book and when Mark Haddon read it he detested it. In 2007, armed with pen and scalpel Mark rewrote the whole story. Soon after, the book became a hit.

Mark Haddon is the author of a book for grown-ups that was an even bigger hit called The Curious Incident of the Dog in the Night-Time. This rather odd title is a line from one of Sherlock Holmes’ short stories. Pablo remembered it from reading Silver Blaze some months ago. For the rest of us who have not such a super memory, these are the lines:

‘Is there any point to which you would wish to draw my attention?’

‘To the curious incident of the dog in the night-time.’

‘The dog did nothing in the night-time.’

‘That was the curious incident’, remarked Sherlock Holmes.