Recommended age: as from 6 years old 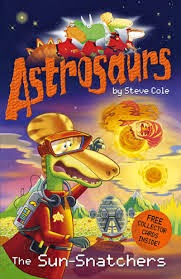 You have probably studied dinosaurs at school, and your teacher has probably told you they were extinct about 65 million years ago (which is such a big number it makes my head hurt!). There are different theories explaining the extinction of these fabulous animals, but the most likely one is that a meteor crashed against our planet. It so happens that Steve Cole, author of this series has some insight about this event:

“By the time the meteor hit, the last dinosaurs had already left Earth for ever. Some breeds had discovered how to travel through space as early as the Triassic period, and were already enjoying a new life among the stars.”

Jaime L.C.: “These books are great for kids about 6 years old, the pictures are epic 🙂 The books are the only ones that I have ever seen that can mix space and dinosaurs and still be epic.”

So, let us introduce you to Captain Teggs Stegosaur and his brave crew Arx Orano, Gipsy Saurine and Iggy Tooth, always ready to fight evil through out the galaxy. 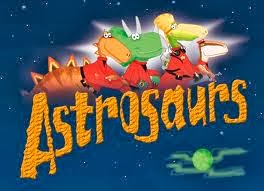 This a very funny series of books that are ideal for younger readers. Each book is about 120 pages, written with big prints to help the reading and with plenty of illustrations. They also have some collectible cards on the main characters.

Daniel L.C.: “When I was younger I absolutely loved Astrosaurs, as it was action packed (then I discovered action movies like GI-Joe and Gladiator!) and I really liked science fiction, so it was the perfect book for me.” 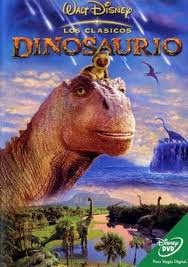 There are many movies about dinosaurs, maybe the best known of all of them is Jurassic Park by Steven Spielberg, it is a great film but a bit scary for the younger children. So, today we recommend this other movie which is good for all ages: Dinosaur from Walt Disney, click here to watch a trailer. 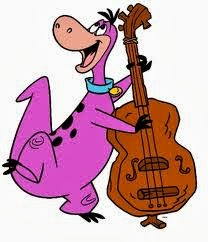 However, our personal favorite dinosaur is Dino, the pet of The Flinstones´ cartoons. He is just so adorable!

Click here to watch a very funny episode of this classic cartoon, (watch out for the TV remote!!)

Pablo L.C.: “Good books for 6 year-olds and a great start to reading science fiction and dinosaurs (terrible lizard in Latin). Childish humor, lots of imagination and some action (though it does not hold a candle to J.K. Rowling´s Fantastic Beasts and… whoops spoke too much…). Astrosaurs is a great series for little ones!”

If you have a chance to visit the National History Museum in London you will be blown away by its Dinosaur section, it is really worth the visit. You can also browse through its web page and learn a lot about these amazing animals. There is one section that we like very much, it is a test to find out which dinosaur you would have been. Click here to take the test, we took it and this is how the boys came out:

Pablo an Allosaurus, Dani a Cryolophosaurus and Jaime an Archaeopteryx.

Which one are you? 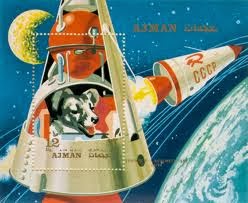 To celebrate San Francisco de Asís, patrón de los animales, we would like to make a loving tribute to one of the best known animals in history, the dog who has helped scientists make it possible to send humans to space.

This is Laika, the astronaut dog and first animal to orbit Earth. Our heroine. She even has a monument in Russia.

She has a quiet and charming little stray dog from the streets of Moscow. She was trained and sent to space on a very important mission. The official story says she died. However, Miss McHaggis has a much happier theory. According to her, and believe me she is always right!, Laika was successfully rescued by Captain Teggs Stegosaur and his crew and taken to the DSS Sauropod, where she enjoyed a happy life full of adventures.