Whats this? Three Jokers and a Harlequin? Someone must be cheating in poker! The last one isn´t even a card!

Happy April Fools Day, and for this post I will be talking about  three of my favourite incarnations of the Joker  and the only female supervillain to be so popular she was transferred from Tv to comic books.

WARNING: the following post is not suitable for children under the age of 9. 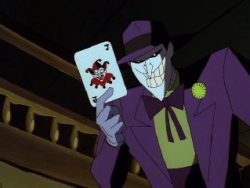 “Know this my sweet. The death of the Batman must be nothing less than a masterpiece!”

This Joker, plainly drawn but still my personal favourite, and voiced by Mark Hammil deeply affected me in my childhood. He was just so brilliant. So, without further ado, here we go:

Years before the Joker surfaced, an unknown crook worked as a an enforcer for the mob bosses Sal Valestra, Buzz Bronski, and Chuckie Sol.  He and Bruce Wayne even glimpsed each other in the Mediterranian Coast. Years later, the unknown man had started his own gang and raided Ace Chemicals, and in a fight with Batman, landed in a vat of chemicals, and was washed out into a nearby river. There, he discovered he had undergone a transformation which bleached his skin and turned his hair green. His appearence snapped his mind, and he called himself the Joker, Clown Prince of Crime.

This new Joker quickly established himself as one of the big fish of crime, respected and feared because of his insanity and utter ruthlesness. He used skills in chemistry and science to develop numerous gag-themed weapons including gas which killed the victim, leaving a horrific smile on his face, a hand buzzer which administered 100, 000 volts and a jack-in-the box with a grenade. The Jokers plans were based simply on his mood. Joker wanted to create mayhem and chaos in a comedic way, often involving himself with other criminals such as Two-Face, Penguin and the Mad Hatter, and even becoming a billionare for a while. 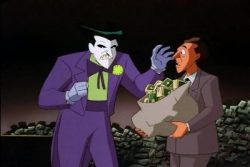 But Joker proved that he was not just deadly but extremely manipulative. Whilst in Arkham Asylum, the Joker made psychiatrist Harleen Quinzel fall in love with him, and adopt a costume and a new name: Harleyquinn. Harley unfortunately went slightly mad and considered “Mistah J ” her boyfriend, and was convinced he loved her back. A combination of Jokers ego and insanity led him to believe that when he started feeling love for Harley, it was a sign of weakness, and took his anger out on her, hitting her, abusing her and even throwing her out of a window.

Joker has a pathological hate of Batman and is desperate to kill him in a comedic way. In an ironic turn of events Harley came closer to killing Batman than Joker ever did. Joker threw her out of a window. He considers Batman the ying to his yang and enjoys tormenting him. On the seven year anniversary of Jokers transformation Joker gassed anchorman Jack Ryder and threw him in a vat of chemicals, the same vat he had been thrown in before. The gas reacted with the chemicals and turned Ryder into the super strong, super agile and yellow skinned/ green haired and crazy Creeper.

This incarnation of the Joker is one that had to make it on my list. For an extract of Batman the New Adventures in which Joker fights Batman after pushing Harley off a roof click here

2. Joker, Batman Beyond Return Of The Joker. 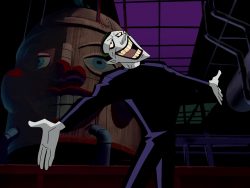 “He told me such secrets, secrets only he could know…Brucey. Yes thats true! And like the child that peeks at his Christmas presents it was sort of anticlimatic. Under all the stern and batarangs, youre just a scared little boy in a playsuit, crying out for Mommy and Daddy! I’d laugh if it wasnt so pathetic.”

Another one of my favourite incarnations this joker managed to keep his legacy going for 35 years.

Things have changed in Gotham or rather Neo-Gotham the city of the future. New batman (Terry Mcginnis) new Justice League and even a gang of psychopaths who worship the Joker as an idol and call themselves Jokerz. 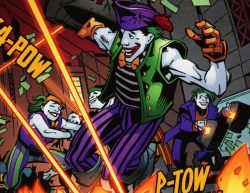 When teenager Terry Mcginnis the new Batman under the tutelage of Bruce Wayne finds that the Joker has resurface things get bad. Whats even worse is that all D.N.A and voice tests show he is identical to the old Joker (see above). But Joker is dead, reveals Bruce Wayne, so how is this possible?

Well jump back a couple of years, to when Bruce is still Batman. Batman and Batgirl have been looking for Robin (Tim Drake) who has disappeared. When the dynamic duo receive an invitation to the demolished site of old Arkham Asylum ( a new one was built in a more secure area) they discover that the people pushing the buttons on this operation are Joker and Harley. After capturing Batman (Batgirl remains hidden on Bruces orders) they reveal their plan. They say that none of them is getting any younger, and they have decided to adda Joker Junior to the family. But rather than go through the “joys of childbirth” that decide to perforna suprise adoption on Robin. In Arkhams old operating theater they drove him slowly insane with seruma and electroshocks, and disfigured him to make him look like the Joker. Robin also revealed that Bruce was Batman.

After a violent fight, Harley falls down a chasm, and Joker stabs Batman in the leg and chest, leaving him weakend. Passing his BANG! gun to Joker Junior he orders him to kill Batman. With his last act of good J.J fires on the Joker, who utters his last horrified words “thats not funny! thats not..”  Robin was sent to rehabilation and after a few years returned to sanity and to his normal aspect, but Batman forebade him to be Robin again.

Well know Joker is back, and follows the exact same chaotic, joke-gag mayhem style he followed 35 years ago. He even steals the controls of a satellite lazer. When Terry finally tracks him to his hideout there is none other than… old Tim Drake? and suddenly before Batmans very eyes Tims skin whitens, his eyes go red, his hair slowly turns green, his ears rise to points and his lips form into a gruesome smile. All those years ago Joker Senior planted a genetic code in Drake, which would transform him into a living copy of himself when the time was right.

Just like his own “Father” and armed with future technology and superpowered sideckicks this Joker, created in a horrible and spine chilling way is worthy of my choice. 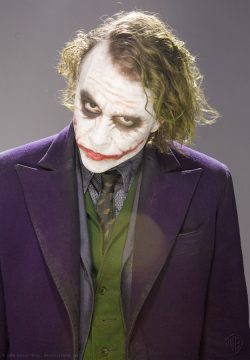 Probably the most popular Joker in pop culture, Heath Ledgerwas; one of the only actors to truly be worthy in the eyes of fans, along with Jack Nicholson. But as is the trend in the darker Christopher Nolan films this guy is different. This Joker is more sadistic, mad and gruesome than ever before, stabbing pencils into eyes and sewing bombs into stomachs. Gone is the leering, snappy voice, replaced by a creepy stutter-ish, manic laugh and soft/angry tone. This Joker wears makeup instead of being doused in chemicals, but is gruesomely scarred, in a way which makes him look like hes always smiling.

This Joker like the Batman Beyond version, surrounds himself with clown themed goons. His misson? To prove to Gotham that anyone can be turned evil.. In the Nolan version Joker doesnt want to kill Batman, describing that he makes him “complete”. He creates the illusion of choice, kidnapping Harvey Dent, district attorney and Bruce Waynes friend and his girlfriend Rachel who Batman cares for. Placing them in two buildings full of bombs he asks Batman to pick one. Arriving just a bit too late, Rachel dies and Dent is disfigured, driving him to become Two-Face.

Heaths Joker has one last thing to do. He places two bombs in a boat full of criminals and one full of civilians and gives them detonators. The trick? Each boat can detonate the other boat. If they dont they both blow up. Joker is foiled by Batman, beaten and picked up by a S.W.A.T team.

A manic, creepy, gruosome and scarred sadist, this Joker bought knew meaning to the phrase: “Why so serious?” click here for a video, but WARNING. Not suitable for young children. 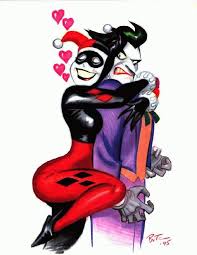 “And there always was the self-righteous Batman, desperate to make life miserable for my angel!”

To end our post, the saddest charecter of them all. Created by Paul Dini in Batman Animated, Harleys backstory made its first appearence in the fan-favourite episode Mad Love, and was so popular she was added into the comic-books soon after.

As explained briefly (see above) Dr Harleen Francis Quinzel was a psychiatrist at Arkham Asylum. On her first day the Joker saw her and winked, and Quinzel became fascinated with the Joker. After the Joker left a flower in her office, he tricked her into arranging a psychiatric session. There Joker fed her lies about a drunk, abusive father, who only ever smiled when he took him to the circus. He also told her about a runaway mother, but you dont see him mention this. Unfortunately for her she fell in love with the Joker. After escaping and being dragged brutally beaten to Arkham Asylum by Batman, Quinzels mind snapped and she donned a costume, broke Joker out and called herself Harley Quinn, a play of her original name.

Later, she decided the only way she could be happy with her “puddin” was to kill the Batman. She drugged him and hung him upside-down over a tank of piranhas, so he would “see their frowns as little smiles”. Batman stalled her with words, and made her cry when he revealed Joker had been lying. She refused to believe him, and called the Joker to come so he could see she had killed the Batman.

Jokers massive ego however, made him so angry Harley had come closer than he ever had at killing Batman, that he threw her out of a window (seriously!) at Arkham, a brutally injured Harley is seen being wheeled and placed in her bed. Whilst she mentally insults the Joker she catches sight of a flower bearing the note: “Feel better soon-J”. The episode ends with Quinn sighing “Angel”, having fallen for the Joker again.

Harley Quinn is a sad, but comedic charecter, and childish in some ways, calling Batman: Batsy, Penguin: Pengy etc. She is utterly insane and completely smitten with the Clown Prince, though her attemps of affection are greeted with slaps, punches and kicks. Harley takes care of two Hyenas who she calls “babies” and is armed with a giant mallet. Her best friend is Poison Ivy who injected her with a serum to make her stronger and faster. To watch how Harley met Joker click here.