Author’s Note: This review may have minor spoilers for the film Aliens. Read at your peril. The following film is not suitable for minors, and contains scenes of intense violence. Viewer discretion is advised. 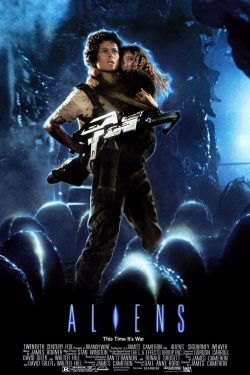 The Alien is the perfect killing machine. Standing well over 6 foot tall, this monstrosity is covered with an armored skeleton, has acidic blood capable of burning through metal, can scale walls and rooftops, has a barbed prehensile tail, as well as a second mouth on its younger, capable of shooting out to further damage targets. One of these killed the entire crew of the ship Nostromo. Imagine a whole planet full of them…

It’s been more than 57 years since the events of the film Alien, in which a rogue Xenomorph killed and devoured almost all of the crew of the cargo ship Nostromo. Now, having been frozen in sleep for decades, the last survivor of the ship Ellen Ripley (Sigourney Weaver) finds out things are far from over. Aliens is the sequel to the cult classic film Alien, directed by Ridley Scott. With a director as prestigious as James Cameron (Avatar, Terminator) it was no surprise that this film was going to be one hell of a ride. James Cameron brings back the character of Ellen Ripley, who after waking up from cryostatis is contacted by the multimillion Weylan Yutani company which requires her service. Abandoned planet LV-426, the last known location of Alien life has been colonized. Now that colony has gone silent. Ripley is sent to the planet to investigate, along with a crack troop of Marines, a macho, cocky group of individuals armed to the teeth, and the representative of Weylan Yutani, Burke. However the situation soon is shown to have unraveled out of hand, with all the colonists having disappeared except for a traumatized girl who goes by the name of Newt. Venturing further into the installation Ripley and the Marines soon discover the hideous truth. The Aliens have been harvesting the colonists, keeping them alive to impregnate them via the revolting facehuggers (parasitic creatures that latch onto your face in order to implant an embryo into you) and have reproduced in enormous quantities. 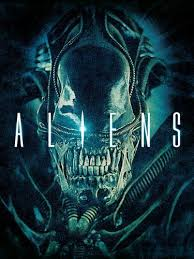 The film in itself is a masterpiece in every way imaginable. Aliens is a visual treat, with sights ranging from the cold, sterile halls of the Waylan Yutani space center, the weapon loaded deck of the Marine ship and the cold, harsh landscape of LV-426, as well as the organic, viscous tunnels of the Alien hive. Aliens holds your heart in its fist throughout the entire run time, with jump scares galore, thrilling moments of danger and self sacrifice, as well as the horrifying reveals of the titular monsters themselves. Cameron exquisitely puts the Marines to good use, crafting some of the most gleefully violent action sequences in sci-fi, with the Xenomorphs tearing their way through the hit squadron in some of the most inventive ways possible.

The characters as well are a hit in favour of Cameron. Sigourney Weavers Ripley hits a swing for feminism, as the no nonsense, gritty portrayal of the character taking over the situation and ignoring the male Marines who consider her too weak, as well as her ingenuity and loyalty make her one of if not the strongest female character in sc-fi films (vying with Sarah Connor from the Terminator.) The Marines are a splash of variety ranging from the testosterone fueled to their inexperienced and pathetic commander. Weylan Yutani representative Burke will be the man you love to hate, as the character is portrayed excellently.

However, as is expected, the titular Aliens steal the show. Designed by artist H.R Giger these sleek killing machines will have you clutching the pillow in terror, as they stalk silently through corridors, or rush straight at their victims, emitting hideous screams as they eviscerate and mince everything in the vicinity. The repulsive facehuggers, finger like appendages twitching as they lunge straight at the viewer will make you hit the roof in panic, and the sheer horror of the Alien hive, filled with the clammy bodies of victims ready for impregnation whilst coated with sticky resin like fluid will have you squirming in your seat. 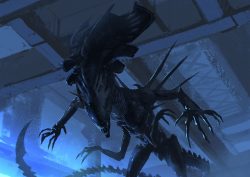 All in all, filled with making characters, great locations, inspired and daring action sequences, fueled by a great plot and filled to the brim with thrill and horror, as well as starring the most iconic monsters in Sci-fi, James Cameron brings to cinema one of his best films yet, a film which proves that not all sequels are bad, as Aliens takes the crown for one of my highest recommended films, and one of my all time sci-fi favourites.